It is really wonderful to see the Umpqua National Forest front and center in a Berlin travel magazine with a circulation of 115,902.

Here is the translation:

In the northwest of the USA there are dense wilderness and a lot of eccentrics. The perfect habitat for encounters with Bigfoot

Joe Beelart is standing 1800 meters above sea level on Mount Hood, not far from the US metropolis Portland. His view goes south, to forests and the peaks on the horizon. “Look at that green down there! No cities, almost only wilderness – optimal conditions,” he says. “We assume there are 30 to 35 creatures living there.”

Beelart is 70 years old and was once with the Marines – afterwards he worked with pumps in the industry for decades. A down-to-earth guy. Nevertheless, he is convinced that strange creatures are hidden in the forests of his homeland: Bigfoots. He’s not the only one. In Oregon you will find more than Portland – the world capital of the hipster – the state is also known for its eccentrics. Together with the neighboring states of California and Washington, it is one of the places where the North American counterpart to the Yeti was most frequently spotted.

The native Americans already reported of a large, human-like species, hairy as a monkey, they called it Sasquatch (‘hairy giant’). The name Bigfoot came up at the end of the 19th century. To this day, cautiously speaking, the evidence is rather meagre. There are eyewitness reports, notoriously bad photos and alleged footprints on soft ground.

Nevertheless, stories about the creatures have found their way into books, films and music. Bigfoot is an ‘icon like Michael Jordan’ writes an anthropologist who has studied the phenomenon. In Portland, bookstores offer a ‘Sasquatch Field Guide’, a handy, water-repellent booklet designed to help you find your way through the wild. There are postcards with ‘Oregon Bigfoot Country’ written on them, you can buy cups, thermos flasks or notebooks with the Bigfoot painting and ‘footprints’ made of chocolate and peanut butter.

Joe Beelart claims to have met his first Bigfoot in the early 1990s. After a Christmas dinner, he saw a creature scurry out of the brushwood. The topic never let him go, he even published a book. It’s called ‘The Oregon Bigfoot Highway’. This is a road in the untouched area near Mount Hood. Allegedly there are a lot of hints to the forest species. The book gathers ‘31 sightings, 43 tracks and 69 incidents related to Bigfoot’.

Beelart’s wife Sharon is an agnostic, as she says about herself. The couple regularly go camping with their Bigfooter friends, including engineers and a retired teacher, and regularly the strangest things happen to them, especially in the dark. Like the other night, they all heard different sounds at two o’ clock at night, Sharon Beelart says. “Something tampered with our cooler. Bang, bang, bang, bang, and after a break, bang, bang, bang again.” About 200 hours in the forest lie between two references to Bigfoot, Joe Beelart knows from experience. But you can also help a little. “Bigfoots are curious.” It would be good to draw attention to yourself. The creatures were also attracted by fruit.

Two days later, in the Umpqua National Forest. The area is more than four times bigger than Berlin. It is located in a part of the Cascade Mountains in the south of Oregon. You can walk here all day long without seeing a human being. On this day, the ‘Windigo Pass Trail’ was about 25 kilometers downhill slowly, through forests with mighty Douglas firs, yellow pines, hemlock trees, along streams and swamps – up to the bunker hill campground, directly on a lake.

If Joe Beelart’s tip also works with a banana peel? Unfortunately, Guide Rusty doesn’t have more fruit. Then we just put the one in front of the tent. “So you’re going to hunt bigfoot tonight?” Rusty laughs. He breaks branches and throws them into the campfire, which crackles and glows while it becaomes dark around.

Rusty, Oregonian in the fifth generation and proud owner of an old Toyota pick-up truck, is living in the surrounding area and offered his help as a local expert. Otherwise he mainly gives courses in fly fishing, for visitors as well as for traumatized veterans. The North Umpqua River is a popular spot for this, its surroundings are the touristic center of the area. Rusty was a soldier, fought in Iraq and worked in Germany for the US Army. He doesn’t like to talk about the former President Bush, and he has a similarly clear opinion on the existence of bigfoots. He gets his baseball cap straightened up and smiles smugly: “Better watch out for the bears, they might like your banana peel. When a cougar comes, you don’t have to worry about it. Then you’ll be dead anyway.”

There are hundreds of species of animals in the Umpqua Forest, most of them harmless. Deer, foxes, bats, owls. “My first rule: Turn off your phones completely while you’re here,” says Rusty. “Only then can you really perceive nature.” On the other hand, there’s hardly any reception anyway. Although the area is not as wild as it seems at first glance, there are some areas of forestry that have been cut down and replanted. But there is no mass tourism yet. Shy forest creatures would undoubtedly feel at home here.

Then the night comes. At first only rain knocks against the tent walls. In the early hours of the morning there are suddenly suspicious noises outside. A cougar? Or is it one of Joe Beelart’s barefoot friends? Another tip Beelart gave me, was how to difference between the sounds of bears and bigfoots: “If the roar lasts longer than ten seconds and varies in height, it’s probably a bigfoot”. But it only rustles briefly, and the next moment it is already over.

The suspicion is obvious that you only have to drive through Oregon’s lonesome, majestic forests often enough – and with a bit of imagination, the mysterious phenomena appears on their own. Beelart is not a missionary; he only talks about Bigfoot when asked, “that’s the same like politics or religion. He prefers to talk about how ice ages shaped the landscape and which forests fell victim to fires in the summer. The best thing about the Sasquatch search is “Flora, fauna, butterflies, the night sky,” he says.

On the second day in the Umpqua Forest there is another hike of 25 kilometers. ‘Dread and Terror’ is the name of the way, part of the ‘North Umpqua Trail’. The name, translated: Fear and terror, deceived. In fact, the path is even more beautiful than the one the day before, it leads directly along the river, on shaded paths under deciduous and coniferous trees, over moss, past ferns and waterfalls. And this time there is even a human encounter in the form of a mountain biker.

At the very end we have to climb a steep slope. Here a hot spring. People squat in different warm water holes and look at the wooded slopes on the other side of the river. There is no entrance and changing rooms, the clothes are left somewhere on the shore. Obviously, the hike was a journey back in time back to the 1970s. The smell of weed is in the air, and a man dressed only with a guitar plays songs. In the basin with the warmest water there is a young couple from Austin, Texas, who have just moved to Oregon. The woman points to her very hairy fiancé, who kept his woolly hat even in the hot spring. “Your search is over,” she says.”You found Bigfoot.” 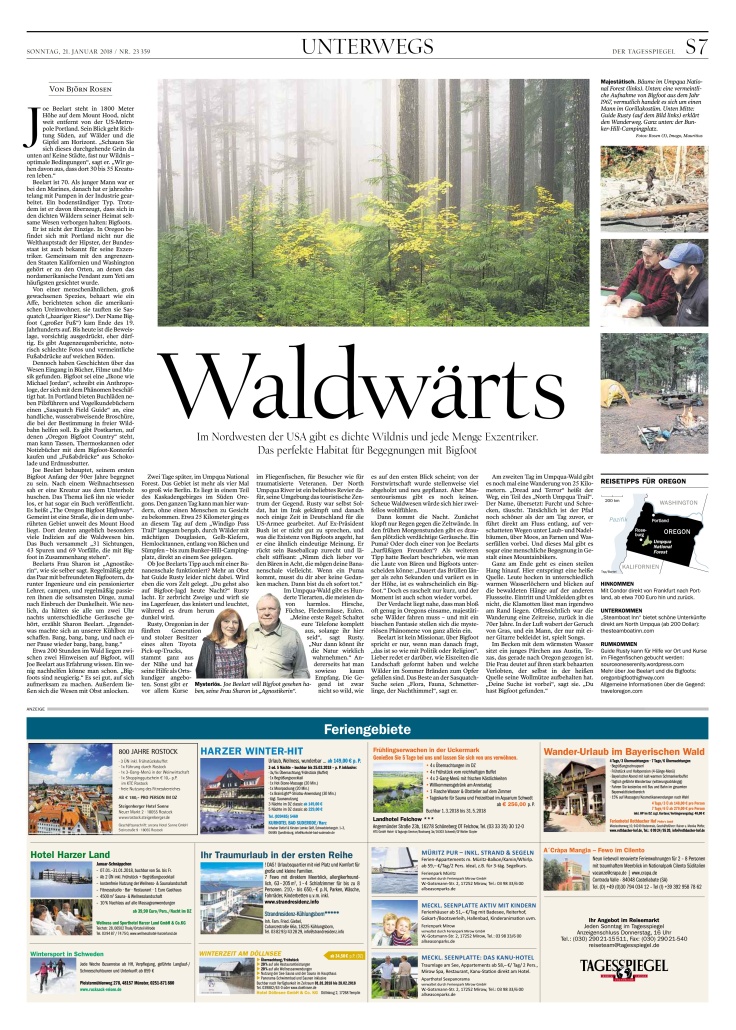